Secure Boot protects a system from an attacker that compromises the boot flow. For example, without Secure Boot it is easy to replace the code that reads your disk encryption password and store it somewhere where the attacker can pick it up later. So ideally you want Secure Boot to be enabled to limit the code that runs on your system to what is supposed to run there.

Unfortunately, NixOS, the Linux distro I use as a daily driver, does not have Secure Boot support. Something had to be done. On an island. 🌴 While attending the Ocean Sprint, a Nix-focussed hackathon, I chose to team up with nikstur and raitobezarius to work on Secure Boot for NixOS!

The sprint was an amazing opportunity to network with seasoned Nix veterans and also great fun in general. Many thanks to zupo and Domen for organising it!

Maybe some background first. As other distros, NixOS boots via systemd-boot on UEFI systems. For Secure Boot to work, systemd-boot demands UKIs. UKI is a format that is intended to wrap a Linux kernel, its command line and the initrd into a EFI application. This EFI application is then signed.

The chain of trust of Secure Boot is maintained by UEFI. All components use LoadImage to load files and LoadImage verifies the embedded signatures.

It’s an elegant design that avoids duplicating crypto in the boot loader and shoves all of this to UEFI.

NixOS users tend to have many system generations lying around. Each of those needs to have a boot loader entry. In the “traditional” UKI flow described above, this would mean a fat UKI binary, including kernel and initrd that may not even have changed, for every generation. Your ESP would quickly fill up.

For NixOS, we wanted to retain the ability to store Linux kernel and initrd separately from the UKI. This means we needed to develop our own stub.

To solve the above problem, we developed a small UEFI application (lanzaboote) that conforms to the UKI spec without embedding kernel and initrd into the UKI itself. Instead we only embed path names and defer signature checking to UEFI with LoadImage.

Lanzaboote is developed in Rust. Because the x86_64-unknown-uefi target is now a Tier 2, the development environment is nice. No need for build-std anymore. I also want to highlight the rust-osdev/uefi-rs project. It helps enourmously to take the hassle out of dealing with UEFI.

The biggest blob of work is integrating this all into NixOS and nixpkgs. This is where nikstur and raitobezarius lead the effort.

We now have lanzatool for assembling the UKI, signing binaries and populating the ESP. We also have the NixOS modules to install everything during nixos-rebuild switch.

And of course we have integration tests. 👍

So far we do not have a way to establish a chain of trust from the (Microsoft) keys that your laptop trusts by default. This means the user has to generate their own keys, which is a bit of an intimidating process. These keys then also have to be enrolled in the firmware.

We plan on streamlining this as much as possible, but so far this has not happened yet.

These are still early days and quite a bit has to happen before Secure Boot for NixOS can be upstreamed. The current status can be found by reading lanzaboote README. If you want to help out, please join us on #nixos-secure-boot:ukvly.org.

I’ll leave you with this screenshot of the GNOME Device Security tab: 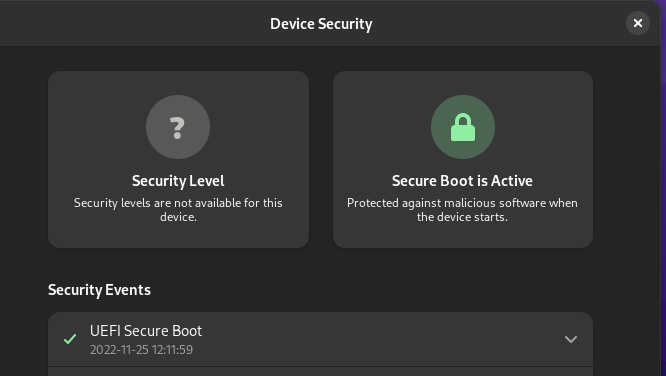 If someone knows, what’s up with the question mark, please comment on this issue.