When I started out with my current project, I had to decide what Instruction Set Architecture (ISA) to target. Credible choices these days are x86, ARM and RISC-V. All three offer all the features to build a modern OS with virtual memory and preemptive scheduling. So from that point they are equivalent, but there are large differences in the complexity and frustration you will encounter.

I’ve written about the differences of x86 vs RISC-V complexity in my RISC-V Stumbling Blocks blog post. Long story short: Everything is simpler on RISC-V compared to x86. Seasoned x86 veterans may enjoy the Page Fault Weird Machine as a case in point. Given that my goal is to stay as low complexity as possible, the choice was easy.

ARM falls somewhat in the middle between x86 and RISC-V for me and I don’t see a good reason to choose it over RISC-V, especially when starting out from scratch. Even if I eventually want to support ARM, it’s probably easier to get everything going with RISC-V and port later.

Since I wrote about RISC-V Stumbling Blocks, the hardware availability situation has notably improved. The different emulators are not the only choice for development anymore.

A PC-class development board, the HiFive Unmatched, has been released in 2020. It sells for around 500€. I went a bit smaller and chose the ULX3S FPGA board that sells for <200€. This board is based on the Lattice ECP5 FPGA, which has a complete open source toolchain and spares me the horrors of dealing with proprietary FPGA toolchains. Go ♡♡♡♡ yourself, Xilinx.

The ULX3S allowed me to experiment with different RISC-V SOCs, such as LiteX and SaxonSoc. SaxonSoc has excellent support for the ULX3S and supports everything from HDMI to audio output. The ULX3S community (available on Matrix as #ulx3s_Lobby:gitter.im) was extremely helpful in getting me going. Prebuilt SaxonSoc bitstreams are available here.

If you follow the instructions, you get a setup with the OpenSBI firmware and the U-Boot bootloader. Running Linux is a good way to check whether everything is set up correctly.

The diagram below outlines what my development setup ended up looking like after some iterations. 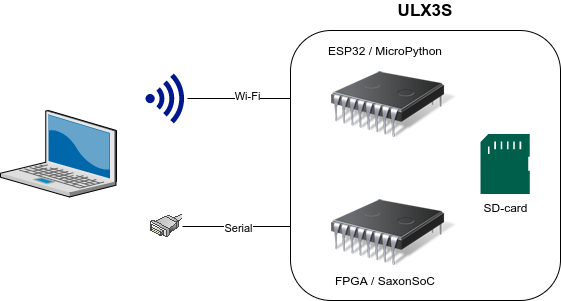 The ULX3S comes with an ESP32 that can connect to Wi-Fi and has access to the SD-Card on the board. It can also flash new bitstreams for the FPGA, if necessary. The ESP32 runs MicroPython and can be configured to serve the SD-Card content via FTP. I use this to push new kernel images to the card.

For debugging and logging, I use the built-in USB-serial adapter of the ULX3S via fujprog. Serial can connect to either the FPGA or the ESP32. I keep serial connected to the FPGA most of the time. For interacting and initially configuring the ESP32, a passthrough bitstream needs to be loaded to route serial to the ESP32 instead of the FPGA. This can also be done via fujprog:

I configured the ESP32 to connect to my Wi-Fi. I then push my binary with this Python script to the board:

I copy my kernel as epoxy.elf onto the SD card. Then I configure U-Boot to automatically boot it on power-up via the following commands in the U-Boot shell:

mmc 0:1 is the SD card device and 0x80000000 is an arbitrary free memory location. Be sure to avoid putting the ELF file to a location that is used by the ELF itself. Check the PhysAddr column of readelf -l to see where it is going to be unpacked to. To find free memory, you can look into the device tree that came with the precompiled Linux using dtc or just check what memory Linux declared as usable in dmesg.

The whole workflow has a turnaround time of few seconds from editing code to running the binary on hardware and I’m pretty happy with it. I haven’t covered how I actually build these ELF files, but this will be a topic for a future blog post.